This report is a general report of the OAI7 conference. Please see a previous report for DSpace specific information, presented at the OAI7 DSpace Pre-Conference day.

All of the link to author names, will take you to the OAI7 programme pages, containing the slides and even audio & video recordings for some of the presentations. Links to our collaborative Piratepad attempts to create live notes during the sessions are included as well.

It was great to witness that the spirit of the original 30 Open Access enthusiasts still resonates with a crowd that was now almost 300 people strong, during the seventh incarnation of this event. The sessions proved to be a successful mix of reporting of innovations in the field and bold outlooks into the future. At the same time, they provided useful content for both technical and non-technical attendees. This report zooms in on a few specific sessions and provides links to related content and notes. 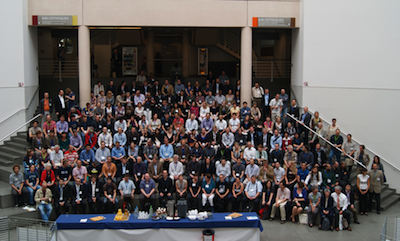 Advocacy and policy topics were covered during multiple sessions. First of all, they were an important topics of discussion at the "Everything you always wanted to know about Open Access" Tutorial on Wednesday 22nd of June.

Heather Joseph (SPARC) mentioned that the Howard Hughes Medical Institute, the Max Planck Society and the Wellcome Trust announced that they are to support a new, top-tier, open access jou.... Although these institutions have been known to support Gold Open Access (by funding the Author Processing Charges or APC's) with existing publishers, entering the playfield themselves with their own OA Journal gives a whole new spin to the story.

David Prosser indicated how we meet less and less people who are totally unaware about Open Access thereby illustrating the advancements in advocacy and policy.

Advocacy was also the topic of the morning session Thursday 23rd of June featuring talks by Monica Hammes, William Nixon and Heather Joseph. Katarina Lovrecic (InTech) did a great job summarizing these presentations.

William Nixon attributed some of the success of the University of Glasgow repository, Enlighten, to strategies for embedding the system in other applications and workflows in the institution.

Contrary to the previous speakers, Heather Joseph went beyond the boundaries of a single institution when highlighting some of SPARC's recent successes in lobbying and advocacy on a national (USA) and international level.

During the session chaired by Herbert van de Sompel, speakers highlighted innovations in the field today while providing insights in future challenges and possible solutions.

Sean Bechhofer used examples like MyExperiment, Sysmo-DB and Methodbox to illustrate how frameworks are required to facilitate reuse and exchange of digital knowledge. With a traditional publication merely being the end product of research activity, he stated that up to 40% of information gets lost in the publishing/mining cycle. It is this information that would allow other researchers to validate the presented results, reproduce and verify them.

Jon Deering explained the T-PEN approach towards innovation of common editing practices in publishing transcriptions. By default, it takes months of transcribing and often years of editing before people can access a full transcription of older, scanned and translated works. T-PEN approaches this topic by publishing transcriptions as added value annotations. Although the newly created content (the transcription) is based on original content, there remains a clear separation between the content itself and the transcription. It's a great, WORKING example that illustrates how working collaboratively on a much more granular level can greatly increase the speed of distribution.

As the last speaker in the session, Barend Mons took the audience on a more conceptual journey to approach (at least) 2 hot issues we face today. Traditional publications are not the most optimal vessels to propagate new knowledge or findings. As an expert on Malaria, the largest part of any new paper he reads on the subject is filled with citations and recall of older work, thus not being new knowledge. Nano publications, broken down bits of (new) knowledge that go down to the assertion level were introduced as an answer. If a traditional paper could be represented as a few hundred of these nano publications it would be much easier to build automated tools that provide researchers with new information and link together assertions from different publications. The second hot issue was the lack of merit and recognition for researchers that produce results outside the traditional publishing workflow. He illustrated this issue with the example of a researcher who built a very successful and often cited gene database. Although his database effectively contains new assertions, who could be represented as nanopublications, he gains no recognition or merit in the traditional publishing workflow.

Although a great number of practical questions & issues could arise when considering broad implementation, this futuristic view really made it clear that moving forward with greater granularity offers considerable benefits for science.

The three talks on Open Science looked at contributions from society to science.

François Grey really made it clear that boundaries between professional scientists and passioned amateurs are becoming more vague thanks to the omnipresent access to information that the web represents. With countless examples, ranging from GalaxyZoo.org to Malariacontrol.net, he debunked several myths about these initiatives, and citizen cyberscience as a conceptual movement.

Not intending to paint a grim picture,Cameron Neylon stated that we currently don't have the cultural infrastructure that supports contributions to society and that we severely lack practices to make some more innovative Open Science and collaboration ideas applicable on larger scales. He did this with a great analogy of a public swimming pool roster, traditionally posted as a printed PDF outside the pool. Today we see that such bits of public information are often mashed up or published online by external, voluntary contributions. The lack of cultural support infrastructure and practices for such contributions become painfully clear when toddlers end up in the reserved race track of the swimming pool after an update of the roster. The pool administration published a new roster in their old traditional way, lacking ways of collaborating with the innovative external contributor who missed this update.

Being a bit more on the tech side of the spectrum, Mendeley CEO Victor Henning showed the audience how Mendeley could work as a component in the open science infrastructure. Often dubbed as "the iTunes of research publications", the Mendeley software allows researchers to build their collections and publication lists online after which this corpus can be leveraged allowing new information discovery and collaboration.

Anja Jentzsch gave an update on Linked Open Data. The most popular illustration of the current state must be the Linked Open Data Cloud http://www.lod-cloud.net diagram.

As an outlook to the future, she indicated that Linked Data within enterprises is the next step as towards an  alternative to data warehouses and EAI middleware, mainly because of the schema-less data model and pay as you go data integration advantages.