OPUSeJ (Open-access Peer-reviewed Universal Scholarly electronic Journal) at www.opusej.org. is a new site, still in an incubation state, which is our answer to "Set the default to OPEN ACCESS". OPUSeJ is an academic article sharing site designed to handle all scholarly articles. Any article, by any author, on any subject, in any language, in any format could be submitted for peer-review to be published for free online access by all. Any article (or a…

The University of Maryland Libraries, a DuraSpace Silver Sponsor and long-time user of Fedora and DSpace, are continuing to add to digitize…

Here is the video of the Workshop Open Access and scholarly communication: opportunities for a new open science (in Italian) held at the University of Turin last October 24th:

SEEd is an Italian medical publishing house, founded in 2000 and based in Turin. SEEd publishes an extensive range of medical books, multimedia tools, and biomedical journals dedicated to the retraining of doctors and other health professionals (http://www.edizioniseed.it/).

In 2010 the publisher, Simone Eandi, decided to start a new journal, Reviews in Health Care (…

It's already been such a lively, interactive, and productive Open Access Week 2012. And now the Right to Research Coalition just launched an amazing video in collaboration with PhD Comics to really wrap up the week nicely. The video entitled “Open Access Explained!” is the perfect resource to…

Hot off the press today:

Open access: everyone has the right to knowledge: https://theconversation.edu.au/open-access-everyone-has-the-right-to-knowledge-10342

Hope you enjoy, feel free to share. Great to link with you all via twitter also: @sandrodemaio

Today, October 24th, the MBLWHOI Library of the Marine Biological Laboratory and the Woods Hole Oceanographic Institution held a general Open Access discussion involving divergent points of view...and we all had some cake to celebrate the day as well! 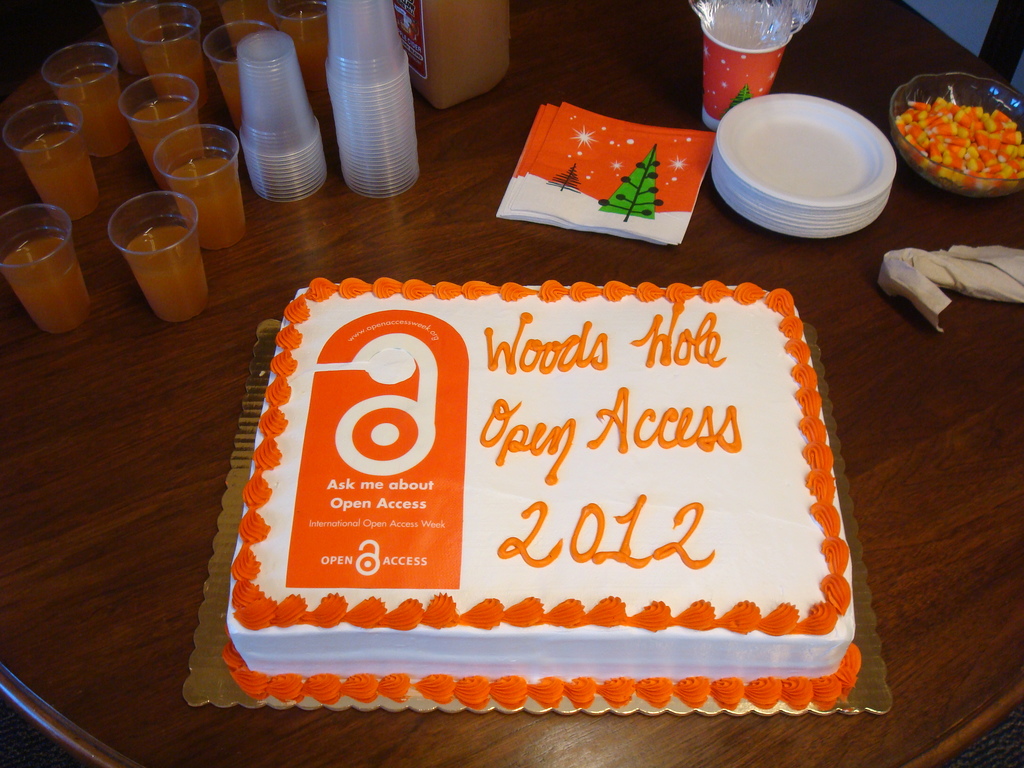 My summary of Open Access Week things on the web thus far this week.

I have attended today, 25 October 2012 an Open Access Seminar at Vaal University of Technology.

Thanks to the VUT Library for organising the event and especially to Mr. Freeman Zulu, VUT Library Director: Client Services for inviting me to speak.

We had a lovely morning engaging in conversation about OA, the important role of the Institutional Repositories in making available free research content; OA South African & African collections, etc.

Most of the items collected in the Smithsonian Digital Repository, a component of Smithsonian Research Online managed by the SI…

When the British government took the brave decision to implement all of the recommendations of Dame Janet Finch’s Working Group on Expanding Access to Published Research Findings, in July 2012, I for one gave a little jump for joy. I worked for six years in traditional subscription publishing and became increasingly disillusioned with the flagrant abuse of taxpayers’ money, as well as the many flaws within the publishing system itself – loss of copyright, time-to-publication, the…

Is anything goin in in JKUAT during this year's OAW????

This will inform the world about OA progress and…

The establishment of open access [is] promoted in the Fourth Science and Technology Basic Plan. Funding agencies should require researchers to report to them the method of access to the results of the funded research, including its open access availability, to control the relationship between funding and its consequences. The research results report form of Grants for…